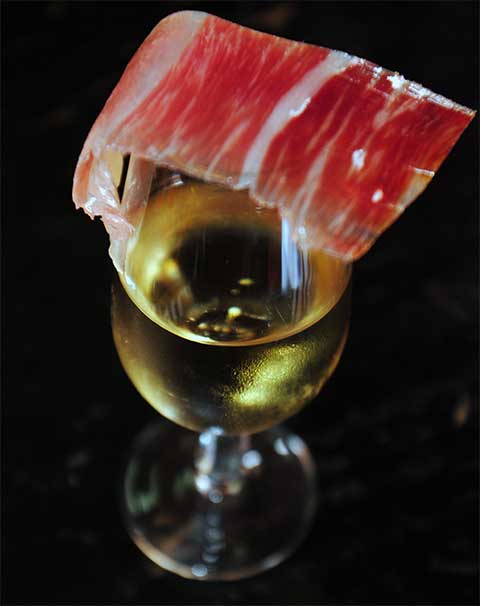 There are many stories and legends about the origin and geolocation of the first Tapa.

Some people say that the idea came from King Alfonso X (who was nicknamed “El Sabio” for some reason) who recommended that, to avoid and even cure diseases, you should drink small sips of wine; as well as to mitigate the effects of alcohol, you should eat something small. The king ordered that all the inns serve the wine like this. Although it was not called “Tapa”, nor did it spread as a culture in ancient Castilla in the 13th century.

Other legends date it back to the time of the Catholic Monarchs. Fernando de Aragón (The Catholic King) visited Andalusia and stopped at a tavern full of flies. The King complained about those pesky bugs and asked for a jar with a lid. The place was humble and they did not have those type of glasses, so the tavern keeper covered the king’s glass with a slice of ham saying “Here is your Tapa (lid), your majesty.”

Popular languages ​​say that it arose on one of the official visits of King Alfonso XIII to Cádiz province. During that visit, he stopped to rest in a country inn that, to this day, still exists. The Inn “El ventorrillo del chato” was (and is) on the beach of Cortadura, on the outskirts of the city of Cádiz.

It was a day of strong winds, the king entered and ordered a Sherry Wine (which is the specialty of this land). At that moment, the wind lifted the sand from the beach and entered into the tavern . The innkeeper decided to put a slice of Jamón (Spanish Cured Ham) on the King’s glass. King Alfonso was surprised and asked why the slice. The innkeeper, apologizing, said that he had done it to prevent the royal glass from filling up with sand and spoiling the wine.

So the King enjoyed his wine and savored the tapa of Jamón, and when he finished he asked for another Sherry to be served “But with a tapa!” he pointed out. That was the origin of this tradition in Andalusia, since all the people who saw it wanted the same thing, and, being a royal tradition, it quickly spread through the plebs.

Surely there are many more theories about the origin of the Tapa. Here I leave you my three favorites and the ones that I find makes the most sense. Which one do you prefer? Do you want to share a different one?